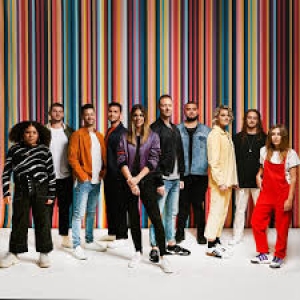 Hillsong Worship (formerly Hillsong Live) is a praise and worship collective from Sydney, Australia and Orange County, California. They started making music in 1983 at Hillsong Church. Fifteen of their songs have appeared on the Billboard magazine charts in the US, with "What a Beautiful Name" (2016) representing their greatest success, reaching platinum in the US. The band has some notable members, including Darlene Zschech, Marty Sampson, Brooke Fraser, Reuben Morgan, and Joel Houston.

As It Is (In Heaven)

Behold (Then Sings My Soul)

Beneath The Waters (I Will Rise)

Glory To The King

I Give You My Heart

Make a donation to support us and become pro